Welcome to the March  2011 issue of WOX (World of XOOPS) Newsletter. Also this month we're a little bit late - sorry for that! (see here previous versions)

And as always, as the first thing in each newsletter we wanted to express our gratitude to all of you who have donated moneyey to XOOPS Foundation! We truly appreciate your trust and support!  This month our biggest donors were Nicholas James ($100) and James Kahler ($50). Thank you! If anybody else would like to donate - please don't be shy!

Highlights of the last month:

Please help us spread the word about XOOPS!! .

Remember - XOOPS is powered by YOU!!!!

If you like the XOOPS system, and would like to give something in return, you can make a donation to the XOOPS Foundation! Simply use the XOOPS Donation System and use your PayPal account or your Credit Card to donate .

Your donation will be used to promote and advance the use and development of the XOOPS system. The XOOPS Foundation is a registered not-for-profit organization in the USA, dedicated to promote XOOPS! All donators will get the Friend of XOOPS rank here on this website. Thanks to all the Friends of XOOPS for their donations and continued support!

This month we've got a donation from several people, and couple of them relatively large:

Thank you so much for supporting XOOPS!!!!

In 2010 we are re-introducing monthly Team Reports from our XOOPS Teams.

Standard maintenance of the Website, and keeping it current.

See Support Site Guidelines. Unfortunately some support sites do not anymore offer the quality of support we are looking for so these sites will have to be removed as official support sites and no longer linked to from the International Support page. This will however, open the opportunity for other webmasters in these regions to start and maintain a local XOOPS Support site, which is a lot of fun and you'll help a lot by spreading our great CMS to your area and language. To apply for official status, use this form (login required).

Our "XOOPSer of the Month" Award is given to XOOPS members who show extraordinary dedication to XOOPS, and go the extra mile for XOOPS. Sometimes they do something spectacular, but most of the time they just do something everyday, but by doing it day-in and day-out, they make a BIG DIFFERENCE in life of XOOPS community. And we thank them for that!!!

This month, we would like to recognize Ruoyu SUN (insraq) from China, for writing a book on building XOOPS Themes and donating the proceeds to XOOPS. This is for the first time ever that we have the same person in a row receiving the "XOOPSer of the Month" Award. Congratulations, Insraq! We are currently looking for a publisher and will keep you posted...

And since you can read his standard interview last month, this month we'll focus on his book: 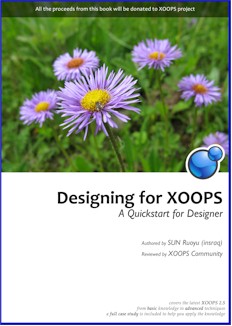 What inspired you to write this book? ?

Well, I have been in the XOOPS community for some time (I joined XOOPS China in 2004). XOOPS is a powerful CMS but lacks documentation. As I have tried several CMS and application framework, I know the importance of documentation.

I have released some themes for XOOPS and I got lots of emails asking how to modify the theme. So I realize that telling people how to design and customize their own theme is much more important than just providing themes. So I believe writing something on XOOPS themes is meaningful.

How do you start writing this book and how long did it take you to write it?

At first I just wanted to write a tutorial on XOOPS themes. I wrote several pages a week until some day I realized that the tutorial could be long enough for a book. Then I ask my self: “Why not just write one?”. It didn’t seem that difficult.

Unfortunately I underestimated the work load of writing this book. I originally wanted to finish it in 5 months but It took me nearly a year. I had been busy during that time and wanted to give up several time. But finally I finish the major content in February.

The books is mainly about designing for XOOPS. I decide not to cover the XOOPS basics as there are lots of materials on that. Also, basic HTML and CSS are not the focus.

So I started by porting an existing theme to XOOPS, to introduce the XOOPS theme engine. Then I discuss some XOOPS related CSS and application of JQuery and related UI libraries.

The next part is on some advanced techniques such as module template override and “block anywhere techniques”. The last sections of the book is a large case study: setting up and designing a XOOPS powered website from scratch.

Why would you like to donate the proceeds to XOOPS?

I never think of making money from the book: it is more like a hobby. And I want the price of the book to be as low as possible, to attract more people to XOOPS. So I decide to give up my share of the profit.

When writing the book, I make use of the modules developed by Trabis, Zoullou, and many of the developers from the Chinese community.

Publishing the book is not easier than writing it. I get a lot of help from the community book: Mamba is helping me to market and distribute the book. Kris is reviewing the technical details. This is not just my book, it is a book of the whole community.

Our XOOPS Innovation Award is given to people who create something very unique and very innovative for XOOPS! We are clear that XOOPS can only succeed, when we push the limits of our creativity, imagination, and innovation to "infinity and beyond"

. And therefore we would like to recognize people who create this "WOW!" effect, when we see what they've done. The XOOPS Innovation Award is not a monthly award, i.e. theoretically, there might be a month where we won't give one, but we certainly hope that this will never happen

This month the Innovation Award goes to John Mordo (jlm69) from USA for his work on Classifieds and Jobs modules. John is from XOOPS almost from the beginning - since July 2002!

Where are you from, and where do you live now?

I am from Southington, Connecticut, I was born here in the winter of 1959 and I still live here. A very nice town in central Connecticut.

How long have you been programming?

I am not really a programmer, but I started about ten years ago with Xoops and wanted a module that was not available, so I started working with code then.

What is your expertise?

I would say my expertise would be troubleshooting, meaning I like to look through code to find out why it does not work or figuring out how to do something.

What got you to XOOPS?

Back in 2000 or 2001 I wanted to make my web site better, after looking for a CMS I found XOOPS, it was easy to setup compared to all others at the time, that meant a lot back then because I was new to this stuff. Plus I can change any code that I want to, so it fits my needs.

The first thing that comes to mind is the XOOPS Community. People from all over the world helping each other out without really knowing each other. It really doesn't get much better than that.

Why did you decide to work on the Classifieds and Jobs modules?

Once the modules were made, I figured I could not have done this without Xoops, so I released them to the community as my way of giving back. As far as Classifieds, the only reason I did it was because at the time there was no currently maintained Classifieds Module. So I decided my modules really came from myads, a classified ads module, so I should take my changes and turn my modules back into a classified ad module, it just seemed like the right thing to do.. This one was really just for the community because I don't really use it.

You just released the update for Classifieds. What are the future plans for it and for Jobs?

I never really have plans for my modules, either I see something I don't like and change it or someone asks for some changes and I make them. I do try to keep up with the latest XOOPS, so anytime my modules NEED to be updated I try to do it as soon as I can. I do plan to release an update for the Alumni Module and the Jobs Module in the next few months.

If you could add one feature to XOOPS, what would it be?

I always take the banners in XOOPS and clone them, meaning I make banner1, banner2, banner3, of the whole banner system. this way I can have different size banners and put them anywhere I want. Plus the user can still login to their banners. they log in to banner1 or banner2 etc. It would be nice to have that built into the core.

I don't know if this is a feature but in Xoops Class folder there is a xoopstopic.php I always thought there should be a xoopscategory.php with a class for categories.

What is your major achievement in programming that you're most proud of?

Not really being a programmer I am proud of all my modules, but the Jobs Module to me is special, the code needs to do a lot of things. The search in the new Classifieds is pretty nice too.

What are your hobbies, when you're not coding?

I like old cars, I have a 69 Chevelle Convertible that I am putting together, that will take a lot of my time over the next 2 months.

You favorite dish and drink?

Food is one thing that doesn't interest me much as I don't really like most food. I guess I'm a steak and potatoes guy. But I love Chocolate junk food. As for drink I am partial to Heineken

What about movies and music?

Music is one of my favorite things, Rock Music. Led Zeppelin, Lynyrd Skynyrd, Scorpions, Ozzy, Tesla. My favorite song is Simple Man by Lynyrd Skynyrd. (if you never heard of it, you should listen to it.) For movies I like romantic comedies the best.

If you would have a chance for a 30 seconds commercial with a message to the world, what would you say?

Congratulations to all of our Winners. Starting this year, all Winners will receive a free book of their choice from O'Reilly. Also a free copy of PHP Storm from JetBrain.

We are still looking for more translations!!! Can you help? See the list here

13. News from around the World

A Garage Module by Philou

Previous article
Next article
The comments are owned by the author. We aren't responsible for their content.
lmzan
Published 04/04/2011 16:59

Congratulations Insraq and all the team involved in the book! Will it be possible to buy the e-book version?

And congratulations to John Mordo, really nice interview, good to know you a little better! I've been working on a website using jobs module for some time now, it's not finished but the module is really great to work with.

Congrats to insraq and jlm69.
Thanks Mamba for sharing firebug hack and thanks to Xoops Community!

I am actually quite pleased to see some more contributors in line this month. :)