news
Including and presenting Media has just become so much easier in the next version of XOOPS!

So what is oEmbed?

oEmbed is a format for allowing an embedded representation of a URL on third party sites. The simple API allows a website to display embedded content (such as photos or videos) when a user posts a link to that resource, without having to parse the resource directly, in other words, it allows embedding content from a website into another page.

An oEmbed exchange occurs between a consumer and a provider. A consumer wishes to show an embedded representation of a third-party resource on their own website, such as a photo or an embedded video. A provider implements the oEmbed API to allow consumers to fetch that representation.

In XOOPS, similar to 'Clickable' filter, Embed will process a URL alone on a line using the embed/embed package. For URLs supporting oEmbed, such as YouTube, the oembed result will be shown. For other URLs, a default media box, built from the page content, will be displayed. See example below of the code, and then representation provided thanks to oEmbed: 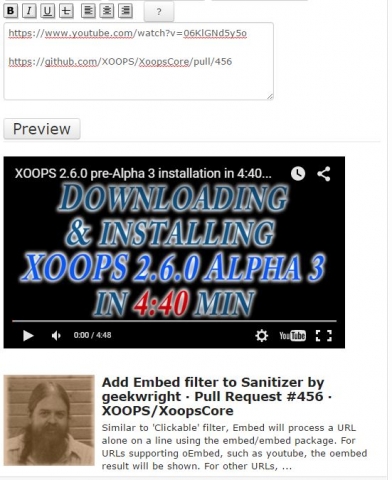 How cool is that?

Items by the same author