The XOOPS Development Team is pleased to announce that a new release of the #1 CMS System hosted on SourceForge - XOOPS 2.4.4 Final is available for download. 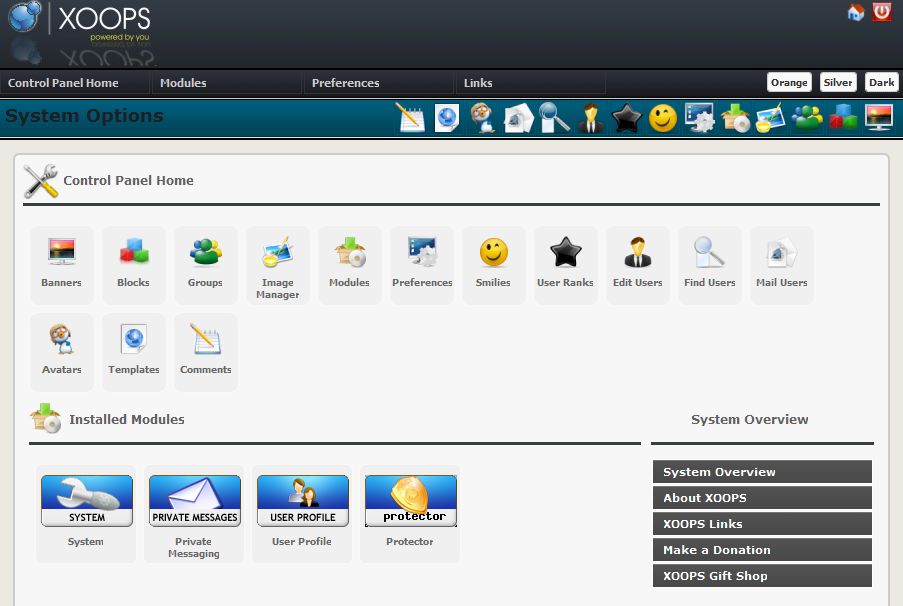 This release is a bugfix-release of XOOPS 2.4.3, done by XOOPS Core Development Team and XOOPS community:

Some of the highlights of the XOOPS 2.4.x series:

Please remember: If you're installing it over previous installation, make a BACKUP first!
Please also note that some hacks done for previous XOOPS versions might not work with this release: testing before installing is always a good choice

We also need help with Translations

MySQL: MySQL server 3.23+ (MySQL 5.0+ is strongly recommended) Please note: XOOPS 2.4.x series is the LAST version of XOOPS tested on and supporting MySQL version lower than 5.0. Our next releases will be tested and certified exclusively on MySQL 5.0+: Web server: Any server supporting the required PHP version (Apache highly recommended) Downloading XOOPS ----------------------------------- Your can get this release package from the Sourceforge file repository Both .zip and .gz archives are provided: xoops-2.4.4.zip: Md5: 74a664ac2b6973bcd4315faf0bbceeb1 Sha1: d1b6d1f241edf2232fde9cfaaeda2e48545ed320 xoops-2.4.4.tar.gz: Md5: 2ed6fc93c62c0a23ddc4d5d436775ea4 Sha1: 332565d3ebd483940803ffeb93827fc45f1de8bf Installing XOOPS ----------------------------------- 1. Copy the content of the htdocs/ folder where it can be accessed by your server 2. Ensure mainfile.php and uploads/ are writable by the web server 3. For security considerations, you are STRONGLY encouraged to move directories "/xoops_lib" (for XOOPS libraries) and "/xoops_data" (for XOOPS data) out of Document Root, and change the folder names. 4. Make the directory xoops_data/ writable; Create (if not already present) and make the directories xoops_data/caches/, xoops_data/caches/xoops_cache/, xoops_data/caches/smarty_cache/ and xoops_data/caches/smarty_compile/ writable (permission 0777 on Linux). 5. Access the folder where you've installed the htdocs/ files using your web browser to launch the installation wizard 6. Follow the instructions You can also check out the detailed Installation Guide Upgrading from a previous version ----------------------------------- Upgrading from XOOPS 2.3.3b and 2.4.x (easy way) 1. Get the right update package from the sourceforge file repository 2. Overwrite files in XOOPS directory on your server with the content of /htdocs * make sure that you copy the content of /xoops_lib to whatever directory you keep it on the server now (it should be your current XOOPS_TRUST_PATH directory), then delete the /xoops_lib directory. There can NOT be two directories with the content of /xoops_lib 3. If you have Protector previously installed, open the "mainfile.php" file , and remove the Pre-check and Post-check lines (if they exist): include XOOPS_TRUST_PATH.'/modules/protector/include/precheck.inc.php' ; include XOOPS_TRUST_PATH.'/modules/protector/include/postcheck.inc.php' ; 4. If you're upgrading from XOOPS 2.4.x, make the file /include/license.php writeable (permission 0777 on Linux) 5. Access

Previous article
Next article
The comments are owned by the author. We aren't responsible for their content.
deka87
Published 2010/1/22 16:52

shouldn't have posted it here, but it'd be nice to have an ability to assign any block to any definite page within a module, like it was in 2.2...

Thanks for the update

Your request is being denied as it appears to be coming from a location banned by our Terms of Use.
Report Not Being From a Blocked Country

If you are not from one of the countries banned from accessing this site, please submit us a Support Request including your IP address (91.184.73.154) and country of origin.

I still have access to SVN ! I hope sf don't lock it for us !

Just wanted to say "Thanks" to Trabis and everybody else who contributed to this release. It's nice to see how vibrant and energized our community has become.

Just looking at the frequency of releases:

we can see that almost each month we have a new releases.

And thanks to influx of new talented developers joining our XOOPS team, we're now able to have parallel development of XOOPS 2.4.x and XOOPS 2.5.x series, and DJ (phppp) working on 3.0.x series. Something that just year ago was not possible to even think about, since practically DJ was the only one doing the Core development.

Our next focus will be on cleaning up the Module Repository, improving our Documentation (incl. cleaning up FAQ and Wiki), and doing more Marketing.

We need community help especially in the Documentation area. We are getting more and more new users which is great, but we need to help them with good and up to date documentation.

So don't be shy - join the XOOPS team and help us!

guys i uploaded the 2.3.3 to 2.4.4 upgrade pack on my server and upgraded via /upgrade/ but after this i can't access the admin.php page (blank page) so i can't upgrade the module. protector lines are also eliminated from the mainfile.php...

Deka, you might have possibly a conflict with your "trusted path", if you had one and didn't remove the "/xoops_lib" directory

After upgrading there is a direct link for updating system module. You may have missed it.

trabis, no it's still blank. mamba, i have uiploaded the content of xoops_lib to the renamed folder of it. i'm not sure about the trust path, where do i check it?

most often the white screen is when:

* there is a conflict between your original "trusted path" and the new "/xoops_lib" directory (e.g. Protector files are in two folders). Therefore it's important that you follow exactly the Installation directions. To see where is your trusted path pointing to, check your "mainfile.php"

* parts of the D3 modules are missing (e.g. Alt-Sys module needs some of its files to be in the "trusted path". If they are not there, you might get a white screen, or XOOPS won't show you any modules in Admin

* incompatibility of some modules. Here you might need to deactivate your modules in myPhpAdmin and then activate them one by one to find out which one is causing the trouble

I think this is protector module problem ( protector in XOOPS pack ) . first please remove protector files from your sever ( after remove files you have access to admin side ) after that if your xoops_lib folder is out of public_html you can download original protector from here and upload new files

Voltan, you're right. that was the protector module issue. i deleted it and updated the modules from the admin. my xoops_lib folder is inside the doc root, so i thought i may upload it again, but nah whenever i upload tehprotector module that comes with the 2.4.x branch i get a blank page. is it the only way to use the module from the link above cos i think it's a little outdated?

read the Installation Guide, especially pages 28-33, so you understand better the Trusted Path. You cannot have Protector in two different folders.

Also, we recommend to use the Protector that comes with the XOOPS 2.4.4.

no i deleted the protector and uploaded it again so i don't have two protectors ofc. i've read the guide, well yes my mainfile points to the renamed folders of xoops_lib and xoops_data.. now i have no protector fodler in my modules repository and once i upload it i get a blank page
--
well i ended up returning to backup, i'll give a shot later. thanks guys

Great platform...
...heading for the success!


The xoops.net.br (it is a site not official suport), but very nice and they have the last core packages

Thanks for this great work, XOOPS team!

blank page after update protector not general problem ! I update one XOOPS 2.3.3 to 2.4.4 and I don,t have this problem

Download does not starts from sourceforge neither do the direct link works. also tried alternate mirrors but invain. please give a direct link for full package of latest xoops.

Just looking at the frequency of releases:

we can see that almost each month we have a new releases.

It is not the quantity, but the quality of releases.
I don't think the amount of recently released versions is something to be proud of. Because they mainly contain bugfixes.
To much, to small fixes within a to small timeperiode laps.
sinnedesign
Published 2010/1/25 11:12

Thanks for the new Release.

The files downloaded from links are corrupt; isn't possible open the zip archive

I don't think the amount of recently released versions is something to be proud of. Because they mainly contain bugfixes.

The industry is moving to smaller and more frequent maintenance releases. When Microsoft was releasing their Service Packs once every two years, people were complaining, and now they release Service Packs, or bug updates more frequently.

So we just follow the industry trends - by having more frequent maintenance releases, we offer users the option to update, or to ignore those maintenance releases, and focus on the major once, like the 2.3, 2.4, and then wait for 2.5, if this is something that is more suitable to people individually.

But my point was NOT to brag about frequency of releases, but about the fact that we are actually able to make these maintenance releases, while the work is being done on new releases, because we have now more developers contributing to XOOPS.

And of that, yes, we can be very proud and excited, because it shows that the project is vibrant and growing!

The files downloaded from links are corrupt; isn't possible open the zip archive

They are not. There is something wrong with your connection or your "un-zip" program. Please try to download again.
Feichtl
Published 2010/1/25 14:17

The industry is moving to smaller and more frequent maintenance releases. When Microsoft was releasing their Service Packs once every two years, people were complaining, and now they release Service Packs, or bug updates more frequently.

Independent of beeing a fan of microsoft or not, their update process is more easier than updating a XOOPS installation. It's just a click away.

Somewhen "automatic" updates (from simple-xoops) have been in the roadmap ... what happened to it? It's not that funny, updating a bunch of websites every few weeks.

Somewhen "automatic" updates (from simple-xoops) have been in the roadmap ... what happened to it?

Alfred is working on updating simple-xoops to XOOPS 2.4 platform. His Website says that it should be reopened end of February. Once this is done, hopefully we'll be able to make more concrete plans for it. But Alfred is the best one to talk about it...

We're definitely interested in having an "updater" solution as part of XOOPS.
rgauci
Published 2010/1/25 17:05

Can anyone check please as I am having an error when I click on the imagemanager to upload a photo. The popup html is blank nothing on it!!!


I did clear the caches in the data folder still the error.

anyone with a list of working modules for this version?

Within the first 4 weeks since the release, we have now close to 10,000 downloads, and still going strong

Finilly I find time to translate newest version. Here is the link:

Edit:
Its on SVN also