The XOOPS Development Team is pleased to announce the release of security patches for XOOPS 2.5.8 and XOOPS 2.5.7.2.

These patches includes the latest version of PHPMailer to address a serious vulnerability. All XOOPS users are encouraged to update as soon as possible.

Both full distributions and patch files (from the most recent prior release) for both the 2.5.7 and 2.5.8 series are available.

Any users that are running older XOOPS versions are advised to update to XOOPS 2.5.8.1 now.

Release files are available on GitHub.

The 2.5.8.1 files are also mirrored on the XOOPS File Repository on SourceForge

Release files are available on the XOOPS File Repository on SourceForge
Comments?

In the next few weeks the XOOPS Website will be very busy, with a lot of work happening in the front of you!

Instead of making a secret out of it, and then creating a huge splash out of it, we've decided to just go ahead and make changes to the Website as we go.

2) We've also moved the Website to the latest XOOPS Core, so we can test it here before we officially release it.

3) We are also updating all modules that are being used here, which will help us, of course with your help, to discover any bugs

We have updated the NewBB Forums to the latest version, as well as News. We'll be converting soon the News to Publisher, as strategically that's what we want to invest our time in.

And we'll be adding some new cool modules, like the one upcoming wgTimelines developed by Goffy from Germany. We'll transition our "XOOPS Innovators" and "XOOPSer of the Month" awards there. The work on the converting the "XOOPS Innovators" to the wgTimelines has already started - you can check it out herehttps://xoops.org/modules/wgtimelines/

We have moved modules developed by Wishcraft to one location on GitHub (read more here), so you can check them out, fork, and contribute back.

We have also created one GitHub location for various XOOPS D3 modules. If you're curious what the D3 modules are, please read more here

Of course, we hope that you'll help us on this journey as we're moving closer to the next release of XOOPS

And in case you were wondering, yes, we're looking for a new responsive theme for this updated Website! So if you would like to design a new theme for us, please let us know...
Read more... | 11 comments 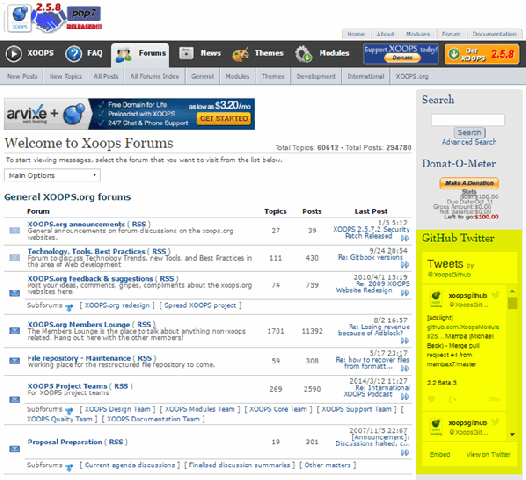 I have also added a block with recent tweets timeline:

Articles about XOOPS in Tech Republic

We knew it already for years, but it's always nice to see that the technology media also considers XOOPS as powerful and limitless as Drupal and Joomla, as it was stated recently in an article in Tech Republic !

This was my response in the comments:
Quote:

"You're absolutely right with your assessment about the need for Simplicity, but I guess, you've missed the XOOPS extension called "Common Utilities" (http://rmcommon.com/en/) :)

So I invite you to download the latest version of XOOPS 2.5.8 (https://xoops.org/modules/news/article.php?storyid=6762), the Common Utilities extension, incl. some of the modules created with this new architecture (http://rmcommon.com/en/modules/)
and take it for a spin and let us know what you think.

The Common Utilities will be part of the upcoming "next generation" version of XOOPS - see more on our XOOPS Roadmap: https://github.com/XOOPS/XoopsCore/issues/252 "

As a follow-up to the article in Tech Republic, the author conducted an interview with us, and it is now posted there as "One on one on one with XOOPS"

So as you can see from the interview, there are a lot of cool things coming for XOOPS, but we need your help, so please get involved: https://xoops.org/modules/news/article.php?storyid=6765
Read more... | 3009 bytes more | 4 comments 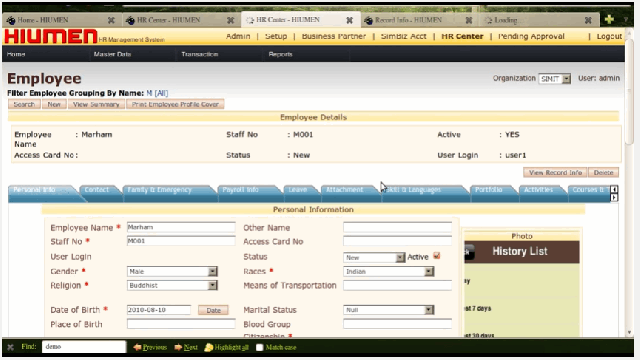 This project focused on providing the developer with a reliable, solid, & visually stunning programming framework. With this framework developers are able to develop great business process management apps based on best programming practices.

The video shows very nicely the most features:


In addition to the original modules contained in the SimAntz Framework:

If you're installing it, please note that there are two databases that you could use:

a) in the /database folder
b) in the /simantz/blankdb folder

XOOPS on GitHub: Let's Get involved!

It makes development, as well as collaboration with other developers, so much fun!

There are tons of tools that contribute to the Eco-system of GitHub and make our lives so much easier:

- you can test your code automatically with tools like Scrutinizer https://scrutinizer-ci.com/
- check your TODO items with https://todofy.org/
- continuous integration with Travis CI https://travis-ci.org/
- write documentation with GitBook: https://www.gitbook.com

and so many more: https://github.com/integrations

It is a lot of fun, and therefore we would like to invite all Xoopsers to create an account on GitHub (if you don't have one yet), and then let us know, so you can join us at our main GitHub XOOPS location:

Please note that we have several repositories on GitHub:

All the tutorials are available on GitBook Repository:
https://www.gitbook.com/@xoops/


Not sure if XOOPS is still up to the challenge for the modern Web development and if you should get involved?

XOOPS developers and designers are always surprising us with the awesome Websites they are able to develop with XOOPS, like this one:

There is a LOT of happening in the world of XOOPS, and more is coming!

2) More and more modules are being converted to XOOPS 2.5.8 and PHP 7:
https://xoops.org/modules/news/article.php?storyid=6759

3) Our Roadmap for XOOPS 2.6.0 is also available, and we're hard at work on implementing it:
https://github.com/XOOPS/XoopsCore/labels/roadmap

4) More and more tutorials are coming to GitBook Repository:
https://www.gitbook.com/@xoops/

and all Xoopsers can collaborate on creating new ones, and contribute, like Kevin is doing right now with the "Kaotik Module Tutorial":
https://github.com/XoopsDocs/kaotik-module-tutorial

So let's get started! Please join us on GitHub, and let's bring the "Magic of XOOPS" back :)

The XOOPS Development Team is pleased to announce the release of XOOPS 2.5.8.

This new version has numerous bug fixes and enhancements. You can download the XOOPS 2.5.8 Final release directly from XOOPS/XoopsCore25 on GitHub, or XOOPS Core (stable releases)/XOOPS_2.5.8 on SourceForge.

Important note: XOOPS 2.5.8 requires some database updates for full function. Be sure to follow the instructions below under Upgrade Required if you are updating an existing system.
Read more... | 8568 bytes more | 39 comments

The XOOPS Development Team is pleased to announce the release of XOOPS 2.5.8 RC3.

This new version has numerous bug fixes and enhancements. You can download the XOOPS 2.5.8 RC3 release directly from XOOPS/XoopsCore25 on GitHub, or XOOPS Core (Beta Releases)/XOOPS_2.5.8_RC3 on SourceForge.

Please note: XOOPS 2.5.8 requires some database updates for full function. Be sure to follow the instructions below under Upgrade Required if you are updating an existing system.

This release supersedes RC2, and includes fixes for issues which were found in testing. A big "Thank you!" goes out to everyone who has helped with testing and reporting!

Please report any issues you encounter with this release so that we can make XOOPS better for everyone. If you are registered on GitHub, just open an issue. We will also monitor the XOOPS forums.
Read more... | 9606 bytes more | 5 comments

The XOOPS Development Team is pleased to announce the release of XOOPS 2.5.8 RC2.

This new version has numerous bug fixes and enhancements. You can download the XOOPS 2.5.8 RC2 release directly from XOOPS/XoopsCore25 on GitHub, or XOOPS Core (Beta Releases)/XOOPS_2.5.8_RC2 on SourceForge.

This release supersedes RC1, and includes fixes for issues which were found in testing. Thanks go out to XOOPS users Yurdal and JJDai for testing and reporting!

Please report any issues you encounter with this release so that we can make XOOPS better for everyone. If you are registered on GitHub, just open an issue. We will also monitor the XOOPS forums.
Read more... | 8501 bytes more | 12 comments

The XOOPS Development Team is pleased to announce the release of XOOPS 2.5.8 RC1.

This new version has numerous bug fixes and enhancements. You can download the XOOPS 2.5.8 RC1 release directly from XOOPS/XoopsCore25 on GitHub, or XOOPS Core (Beta Releases)/XOOPS_2.5.8_RC1 on SourceForge.

Please report any issues you encounter with this release so that we can make XOOPS better for everyone. If you are registered on GitHub, just open an issue. We will also monitor the XOOPS forums.

Without the contributions of many, this release would not exist. A big "Thank you!" goes to everyone that has contributed. In alphabetical order, the list includes:

Lots of effort has been put into making XOOPS better cleaner, safer and more compliant with current standards and best practices.

Passwords are now hashed using PHP's password_hash() function. A library that brings compatibility to users with PHP versions earlier than 5.5 is included.

The new XMF library (see below) includes support for JWT, which can be very useful in securing AJAX and REST processing.

The world of PHP is in constant motion. The recent release of PHP 7 brings with it huge improvements, but also compatibility issues. While XOOPS 2.5.8 supports PHP 5.3.7 through the latest 5.6 release, PHP 7 support should still be considered experimental, and is released for public testing.

MySQL support using the mysql extension has been deprecated for quite a while, and PHP7 removes it completely. XOOPS 2.5.8 now uses the mysqli exclusively. Any database access using standard calls to the XoopsDatabase classes will use the newer mysqli extension. Some modules are using direct database calls through PHP mysql_* functions. These will continue to work under PHP 5, but it is recommended that module developers consider remediation of any such calls.

Another thing that changes in PHP 7 is "All of the E_STRICT notices have been reclassified to other levels." In previous XOOPS versions, E_STRICT warnings have been suppressed when using the debugging logger. These are no longer suppressed to give developers insight into what may need to be fixed. We've tried to make sure XoopsCore runs clean, but modules may produce debugging output you have not seen with earlier versions.

Custom administration themes may have issues due to a long existing bug in the XoopsSystemGui::validate() definition.

XOOPS Module Framework library, the XMF library, is now included, and is used in the core in several places. XMF is a library of standard classes useful in module development. It can be very useful in the near future, as all of its classes are forward compatible with the next generation of XOOPS.

Developers can learn more in the XMF Cookbook, and may want to look at the Xmfdemo module on GitHub.

There are database changes with this version. There are no new requirements for a fresh installation, but for updating an existing system, follow the recommended upgrade process. In a nut shell:

- Make a full backup of site files and database. (We've done lots of testing, but it is always best to be safe.)

- Copy the contents of the distribution htdocs directory into your web root directory.

- Copy the distribution upgrade directory into your web root directory.

- Point your browser to http://your-site-url/upgrade/ and follow the prompts.

- At the end, follow the link to upgrade the system module.

- Remove the install and upgrade directories from your web root.

Your site should be ready to use.

NOTE: Work continues on our next major release of XOOPS! To see what's coming, please check out our GitHub code repositories:

and especially the great work Eduardo (bitcero) is doing on:


Please also check out our other Github repositories: