Writing great, high quality code is hard. Understanding the nuances of the languages you use, and the way in which you accomplish certain tasks can be highly challenging. That’s why The Crafting Code Tour is coming to a city near you in Summer of 2014. And the best part? Attending is completely FREE!

The Crafting Code Tour is a 18-city, 15-state, 3-country speaking tour aimed at the PHP user group community. Kicking off in June, this tour will hit sixteen cities in North America and bring along world-class speakers of different types to speak at individual user groups. To the user groups, this event will be free, paid for by sponsors of the tour.

The Crafting Code Tour will focus on how developers can do their best work, how software development is a craft, and how we can grow. While the list of speakers along the tour route is still being compiled (and will likely change for various cities), the goal is clear: to prove that it’s not impossible to bring outside speakers to individual user groups.

The meeting in Cincinnati, OH is on July 16 at the UC School of Information Technology.
To register, please go to:
http://www.meetup.com/TechLife-Cincinnati/events/169927672/

Assets are a very important part of the user experience. For today's rich, highly interactive web applications, the asset performance may be more significant than the backend application and database performance.

In XOOPS 2.6.0 we'll use Assetic, originally developed by Kris Wallsmith, to manage all the assets.

Richard Griffith, our Core Team leader, has created a presentation to show you how XOOPS 2.6.0 will be managing its assets. You can see the presentation on SlideShare 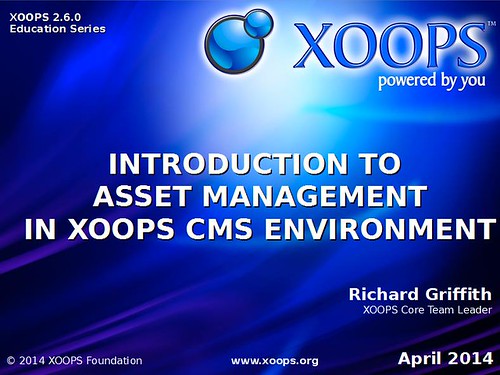 This is the first presentation from our new "XOOPS 2.6.0 Education Series", where we will share with new features being developed for XOOPS 2.6.0, and show you how to use them.

XOOPS 2.6.0 is currently in development, in pre-Alpha 3 stage.

There is a lot of new development going into XOOPS 2.6.0, as you can see from these articles:

XOOPS is back, and with a vengeance!

Major improvements to XOOPS 2.6.0, Alpha 3 release is getting closer!

and after adding Doctrine, PHPUnit, Composer, and several other cool things, Assetic is just another example of how XOOPS is leveraging contributions from the Open Source community!

You can contribute to the XOOPS 2.6.0 development by forking it from GitHub, and submitting your code there.

We would also like to thank Slider84 from XOOPS France for his help in creating the template for this presentation!

We are getting closer to have a PHP 5.5.x - certified XOOPS version.

Today we are very happy to release for testing XOOPS 2.5.7 RC-1

This release is focused on PHP 5.5.x compatibility, security enhancements, and bug fixes. We have also updated jQuery and several jQuery components.

Angelo Rocha also has updated this new cool theme: the xBootstrap theme, based on Bootstrap

See the Changelog below for more details.

Please note: the fact that the XOOPS Core runs correctly on PHP 5.5.x, doesn't mean that all your modules will run correctly, therefore you'll need to test them first.

The recently released modules that qualify for our Basic Module Pack, are all tested on PHP 5.5.x, and they should run just fine.

For all others, please let us know about any issues you might have.

Please remember: This is a RC version and mainly for features testing!!!!

As more and more hosts are offering in addition to PHP 5.4.x also PHP 5.5.x, it was important that we update and certify XOOPS for PHP 5.5.x as well.

Today we are happy to release for testing XOOPS 2.5.7 Beta 1, that will run without any problems on PHP 5.5.x

This release is focused on PHP 5.5.x compatibility, security enhancements, and bug fixes.

But we have included one new cool thing: the xBootstrap theme, based on Bootstrap

See the Changelog below for more details.

Please note: the fact that the XOOPS Core runs correctly on PHP 5.5.x, doesn't mean that all your modules will run correctly, therefore you'll need to test them first.

The recently released modules that qualify for our Basic Module Pack, are all tested on PHP 5.5.x, and they should run just fine.

For all others, please let us know about any issues you might have.

Please remember: This is a Beta Release version for features testing only!!!!

It's time to offer to our French-speaking community a new modern way to inform them about XOOPS.
This is the XOOPS Podcast at http://podcast.frxoops.org/. For Android smartphone user, u can install the Podcast Addict

For Iphone and Ipad, all is included

XOOPS Japanese Support is back

To everybody loving XOOPS - XOOPS Japanese Support is back again.

We are very excited that XOOPS users in Japana will have the needed support in their native language
Read more... | 1 comment

Happy Holidays and Happy New Year to all XOOPS users and friends!

Wishing Happy Holidays and Happy New Year 2014 to all of our users and friends! Major improvements to XOOPS 2.6.0, Alpha 3 release is getting closer!

Yesterday he committed a major batch of new features to our code repository on GitHub, and I thought that it was significant enough to make it a special news!

This is the summary from Richard:

The conversion required lengthy testing, and a variety of other changes that cover the same space have been included:

Note: running composer update is required for these changes as several packages were added and/or updated. (see this info to learn more about Composer, and how to install it. There is also this good article here)

You can merge this Pull Request by running
git pull https://github.com/geekwright/XoopsCore master
Or view, comment on, or merge it at:

Please fork it on GitHub from XOOPS repository, test it, and help us with debugging and improving!

XOOPS is back, and with a vengeance! :)

I don't think, we had so much excitement about XOOPS as we have right now, in a very very long time!

We're now starting to work with full power on XOOPS 2.6.0!

After incorporating the Doctrine DB Abstraction Layer, that puts us on par in the DB area with projects like Laravel and Symfony, which are also using Doctrine, Richard Griffith, our new Core Team leader, continues to deliver amazing things!

Building up on the awesome work on XOOPS 2.6.0 by Trabis, ForMuss , Mage and Dugris, Richard just did some major redesign of our Debugging/Logging system, making XOOPS the CMS with probably the best debugging/logging capabilities in the world! Something what all serious developers will truly appreciate!

- Our new logging mechanism in Core is now PSR-3 compliant, which currently only very, very few projects can claim!!!

- he has replaced our outdated Debug view with the awesome PhpDebugBar module, that will provide our developers with tons of useful information.

As you can see above, our new PhpDebugBar is actually a "PhpDebugBar on steroids" because it merges it with information that XOOPS provides. So now we'll have the same information as the old Debug, but much, much more, incl. Smarty info and the cool timeline! Check out the original PhpDebugBar to see the original limited version of the PhpDebugeBar, but if you want to see what Richard did, you need to download XOOPS 2.6.0

- we've converted our Legacy Logger to the new logging system

- and Richard is almost done with reworking of Trabis' XMF (XOOPS Module Framework). We plan to use XMF as a migration tool for existing XOOPS modules. Once converted to XMF, the current modules should be able to run on XOOPS 2.6.x, with no or only very minimal modifications, which will keep with our tradition of easy migration for our users.

You can fork it from our GitHub XOOPS Repository

Oh, did we mentioned that we're already using PHP Composer and that in the future we'll be also fully utilizing Packagist?

Another work that we're doing is to have the whole XOOPS Core tested using PHPUnit.
Alain91 from France, who is leading this effort, has written already majority of tests, and we also have already set up a dedicated website with Jenkins. This is still in a testing phase, but once we go live with it, all submitted Core code will have to go through Jenkins to be accepted into the central repository.

And Richard and his team are just warming up

But why wait? Just join the XOOPS Development Team and start contributing to XOOPS, either in the Core area or in the Module Development area, or both!

Please join the conversion in this thread!

XOOPS is Powered by YOU!!!